On Dad’s 100th birthday anniversary, June 28, 2016, my sisters and oldest brother gathered in Seattle and ate and drank some of Bob Guthrie’s favorite foods: cornbread dipped in buttermilk with a dollop of honey, peanut butter and tomato and a shot or two of Scotch. ?Bob Guthrie claims the “invention” of open-face peanut butter and tomato sandwiches on wheat bread because no one else would admit to foisting this combo on the world. “The tomatoes make the peanut butter less sticky, the riper, the better,” he’d tell people, enthusiastically. Speed and convenience were the other reasons Dad whipped up this “meal” while sailing. He’d often be juggling crackers, cheese and a pb and t sandwich in the cockpit of his boat, one hand on the rudder, the other on the line to the sail. We dusted off his lab coat and kept most of his public health message buttons on it. The European Society of PKU designated June 28 International PKU Day?in 2013 because both Dr. Robert Guthrie and Prof. Dr. Horst Bickel of Germany shared the same June 28th birthday. The two of them became good friends as they joined forces to bring the PKU Guthrie dried blood spot test and Bickel’s low-phenalyanine diet to infants in many countries. ?This year, the E.S. PKU group hosted a virtual Guthrie Memorial Dinner, inviting people to submit photos to this website 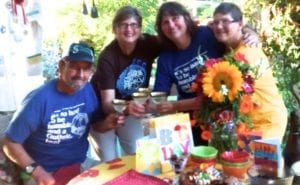 1.) Two spoonfuls peanut butter
2.) Big ripe tasty tomato, cut into thick slices
3.) Spread peanut butter on one side each bread slice
4.) Top with tomatoes
5.) Sprinkle with salt (if desired)
6.) Eat as an open-face sandwich
7.) Serve with large glass of buttermilk or lemonade
8.) Best enjoyed in the cockpit while sailing
**contains peanuts, gluten; not recommended for low-protein diets